A Model of Associative Memory

How memories are encoded in neural matter is still an open question. The name for these supposed neural correlates of memory is “engram”, and papers about engrams tend to have titles like Finding the engram, Catching the engram, In search of the engram, Continuing the search for the engram, which, though I’m not an expert, makes me feel like the problem isn’t well understood.

(Also, Rite of passage of the engram and Manipulating a cocaine engram, making the practice of neuroscience sometimes sound like a fraternity hazing. Possibly related, while researching this post I learned that a typical experiment will usually involve things like shocking the feet of a fruit fly, sewing shut one eye of a barn owl, and shaving half the whiskers off a mouse.)

A popular theory is that memories are encoded as patterns of synaptic connections. Perception creates neural activity. Neural activity leaves an impression upon the brain as a pattern of modified synaptic connections (perhaps by dendritic spines, which become larger and more numerous to make the connection stronger). A later perception might partly activate this pattern, but this partial activation is often enough to activate the rest of the pattern, too. This is supposed to be a neural model of associative memory. (The tradition is to cite Proust at this point; evidently, a sponge cake was sufficient to activate in him the neural substrate of a 1,267,069 word novel. It’s remarkably illustrative, at least.)

Hahnloser and Seung present a model of associative memory in symmetrically connected networks using instead a threshold-linear activation function (or rectified linear function).

They show that, due to some nice properties of the rectifier, such networks can in general represent multiple patterns of stable activation even for a single input. What pattern the network will fall into upon new input, depends upon what pattern it was in before. Memories linger.

Their main contribution in this paper is in classifying neurons into what they call “permitted” and “forbidden” sets, which describe what sets of neurons may be activated together in a stable steady-state. They describe a method of determining what patterns of stable activity the network can achieve.

The existence of permitted and forbidden sets suggests a new way of thinking about memory in neural networks. When an input is applied, the network must select a set of active neurons, and this selection is constrained to be one of the permitted sets. Therefore the permitted sets can be regarded as memories stored in the synaptic connections.

It helps to think about neurons as being active within “chambers” of the activation space. (These chambers can be found by considering when the expression inside \([\cdot]_+\) is equal to 0.) In each chamber, some of the neurons will be active and some will be inactive. Within each chamber, the network will evolve according to that chamber’s linear equations: \[ \dot{x} = -x + W_\sigma x + b_\sigma \tag 3 \label 3 \] (Here, \(\sigma\) means the set of neurons that are currently active, and \(W_\sigma\) and \(b_\sigma\) have entries set to 0 for those neurons not in \(\sigma\).) Whenever the system enters a new chamber, some neurons will switch on and some will switch off, and a new set of linear equations takes over. Each chamber has a set of eigenvectors given by \(W_\sigma\). These eigenvectors show straight line flows within that chamber.

First, the rectified version. The activation space is divided into four chambers; the labels indicate which neurons are active in that chamber. Each curve represents different initialization values for the neurons; the input vector \(b\) is always the same. On the right is a plot for one initialization. In this example, the network always converges to a single steady state, though in other networks there may be more than one. 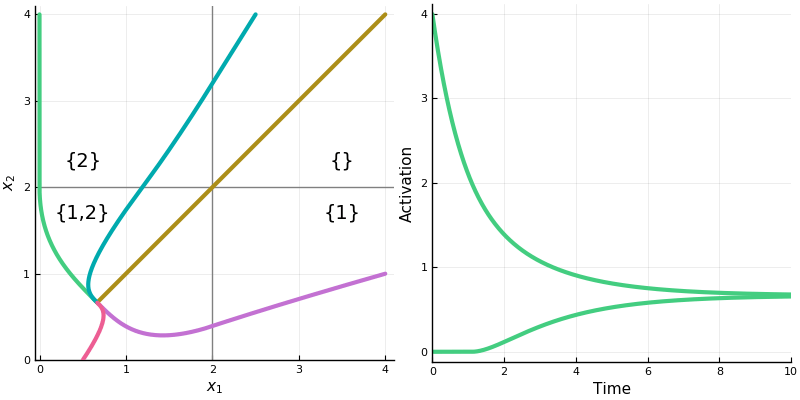 Notice how the dynamics change when the system enters in innermost chamber \(\{1,2\}\). Compare this to the same system lacking the rectifier \([\cdot]_+\); it is a linear system. 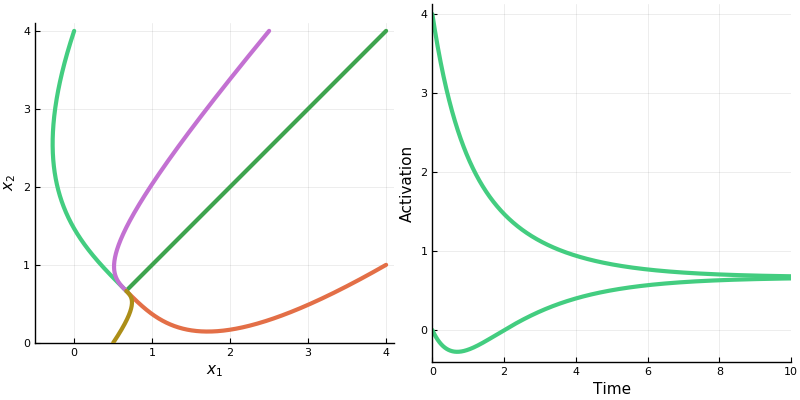 The authors prove three theorems. The first gives the conditions under which a network will have a set of global, stable steady states (aka. globally asypmtotic fixed points, equilibrium points), depending on connection weights and input. These steady states, when they exist, are fixed points of activation to which the network will always converge.

Assuming these conditions, in the second and third theorems the authors give two possibilities for this set of steady states. The first possibility is that the network contains forbidden sets of neurons, neurons that may not be activated together at a steady state; in this case the network will be multistable: for a given input, it may converge to one of several steady states depending on initial activations. The second possibility is that there are no forbidden sets; in this case, for a given input, the network will always converge to the same steady state; as far as stable points go, it is just like a linear system, without the rectifier.

Again, this theorem gives the conditions under which a network may have a set of stable steady states.

If W is symmetric, then the following conditions are equivalent:

One of the things I liked about this paper was that they proved their results using methods from both Lyanpunov functions and quadratic programming. They prove that \((1)\) implies \((2)\), for instance, by minimizing \(v^\top (I - W) v\) (a quadratic function) for nonnegative vectors \(v\) on the unit sphere (that is, \(\left\lVert v \right\rVert = 1\)). The quantity \(R(v) = v^\top (I - W) v\) is equivalent to the Rayleigh quotient. Optimizing \(R\) will find the eigenvectors of the matrix \(I - W\). Because of the rectifier, neural activations (provided they start above 0) can never fall below 0. Any steady state therefore will occur along a non-negative eigenvector. This, I think, is one of the most important insights about the effect of the rectification.

Here are the authors again:

The meaning of these stability conditions is best appreciated by comparing with the analogous conditions for the purely linear network obtained by dropping the rectification from (1). In a linear network, all eigenvalues of W would have to be smaller than unity to ensure asymptotic stability. Here only nonnegative eigenvectors are able to grow without bound, due to the rectification, so that only their eigenvalues must be less than unity. All principal submatrices of W must be considered because different sets of feedback connections are active, depending on the set of neurons that are above threshold. In a linear network, \(I - W\) would have to be positive definite to ensure asymptotic stability, but because of the rectification, here this condition is replaced by the weaker condition of copositivity.

So, the tradeoff for the rectification is that we get stability for more general sets of weight matricies, but we have to analyze all \(2^n\) principal submatrices to find out if we get it.

Theorems 2 and 3 - Permitted and Forbidden Sets

These two theorems classify the permitted and forbidden sets of a network.

The first theorem tells us that if a network has a set of global, stable steady states, then all of the nonnegative eigenvectors of all principal submatrices of \(I-W\) will have positive eigenvalues. When the system begins with positive activations, the activation will flow along time-varying superpositions of the (nonnegative) eigenvectors toward some fixed point. We might think that every subsystem has to have a fixed point, then. But this is not so. It could turn out that what would be the fixed point for the subsystem lies outside of its chamber, and then the dynamics will have changed before the system ever reaches it. In this case the system has a forbidden set, because the neurons in that subsystem cannot be coactivated together at a stable steady state.

If the matrix \(I - W\) is copositive, then the following statements are equivalent:

They prove that (2) implies (3) by examining a Lyapunov function \(V(x) = \frac12 x^\top (I - W) x - b^\top x\). They argue as follows: a forbidden set implies the existence of a negative eigenvalue of \(I - W\) in the corresponding active submatrix. The function \(V\) therefore forms a saddle. The system can be initially activated on either side of the saddle, and will descend to a different minimum on each side. These are two different stable steady states.

Theorem 3 If \(W\) is symmetric, then the following conditions are equivalent:

A linear system, like \(\ref 3\), will have a global steady state if \(I-W\) is positive definite (all eigenvalues are positive). So, in a rectified system if all the neurons may be activated together at a stable steady state, the system behaves much like a linear system in regard to its steady states. Rectified systems are more interesting when they have some forbidden sets.

If I am understanding the paper correctly, we could characterize permitted and forbidden sets like this:

Finally, they show with the interlacing theorem that the sets of neurons that may be coactivated together at stable states are constant in some sense throughout the system, for the reason that eigenvalues of a submatrix have to be contained in the radius of eigenvalues of the parent matrix.

Any subset of a permitted set is permitted. Any superset of a forbidden set is forbidden.

Here for instance are the permitted sets for a network of ten neurons with randomly generated weights.

And this shows the steady state of the topmost permitted set with each neuron receiving an input of 1.

And here is a (different) network transitioning through stable states as inputs and activations vary.

If a connection pattern in a network is a memory, then multistability allows the brain to store memories much more efficiently. Patterns of activation can overlap within a network. One neuron can partake of several memories, much like a single gene can be implicated in the expression of a multitude of traits or behaviors. I imagine that whatever process the brain uses for memory storage, it must make a tradeoff between robustness and efficiency. It wants to minimize the cost of storing memories and so should use as few neurons as possible to do so, yet the death of a single neuron shouldn’t disrupt the system as a whole. The model of overlapping patterns seems to me like a plausible solution.

(I decided to read this paper after becoming interested in Carina Curto’s work on combinatorial threshold networks. She and her collaborators have extended the ideas presented here to more general threshold networks that can display various kind of dynamic behavior. I hope I can review some of her work in the future.)